First Sunday of Advent – The Candle of HOPE 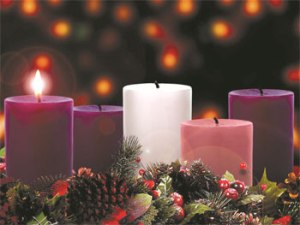 You and I, by virtue of our calling and baptism into Christ, are co-creators with God of bringing this dream to reality. This church exists so that we can hear the dreams of old, have our own imaginations stirred, and invite our neighbors to work alongside us for the healing of the nations – the way of God’s shalom.

As you enter into this Advent season, what are your dreams? What is your hope, of which your faith in God will be the assurance?

As a prayer for God’s fulfilling these hopes and dreams, we light the candle of Hope.

Ash Wednesday is a reminder that we all have a Phoenix inside us. Periodically we need to be consumed by an inferno that burns away everything temporary and fleeting.

And then in time we reemerge from the ashes, new, fresh and ready to take on the world.

Yet at this stage we may be frail and vulnerable, needing the nurture and care of mentors and a community that provide safe space in which to try our wings.

In the process we may even discover that our tears have cleansing and healing powers.

I was born to be with you…

Only love can leave such a mark…

I was born to sing for you…

What in your life stirs this kind of response?
Where, when, and with whom do you realize that the source of life is Magnificent, and that you, as a result, are magnificent too?