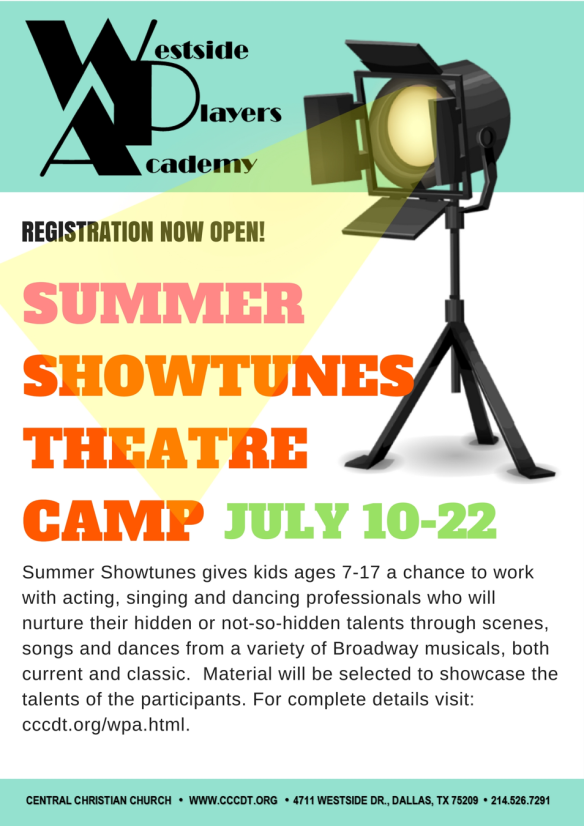 Join us in July for this “triple threat” camp that includes professional coaching in acting, vocal and dance. You can find all the details here.

Then Peter came to Jesus and asked, “Lord, how many times shall I forgive my brother or sister who sins against me? Up to seven times?”Jesus answered, “I tell you, not seven times, but seventy-seven times.

“Therefore, the kingdom of heaven is like a king who wanted to settle accounts with his servants. As he began the settlement, a man who owed him ten thousand bags of gold was brought to him. Since he was not able to pay, the master ordered that he and his wife and his children and all that he had be sold to repay the debt.

“At this the servant fell on his knees before him. ‘Be patient with me,’ he begged, ‘and I will pay back everything.’ The servant’s master took pity on him, canceled the debt and let him go.

“But when that servant went out, he found one of his fellow servants who owed him a hundred silver coins. He grabbed him and began to choke him. ‘Pay back what you owe me!’ he demanded.

“His fellow servant fell to his knees and begged him, ‘Be patient with me, and I will pay it back.’

“But he refused. Instead, he went off and had the man thrown into prison until he could pay the debt. When the other servants saw what had happened, they were outraged and went and told their master everything that had happened.

“Then the master called the servant in. ‘You wicked servant,’ he said, ‘I canceled all that debt of yours because you begged me to. Shouldn’t you have had mercy on your fellow servant just as I had on you?’ In anger his master handed him over to the jailers to be tortured, until he should pay back all he owed.

“This is how my heavenly Father will treat each of you unless you forgive your brother or sister from your heart.”

Several things are going on here.

In the text it seems a clear implication that God has much more to forgive than do we, or is at least far more extravagantly forgiving by comparison. 10,000 bags of gold, whatever their worth, is an incalculable debt compared with 100 silver coins. There is truly no way the former could have been paid. It’s hard to imagine how that debt was accrued to begin with. Who let it go that far? What happened to cause such a breach of trust? We don’t know, because that’s not the point.

We do well to note the opening dialogue giving rise to this story: Peter asks how many times should I forgive? The tradition taught that a righteous person would forgive 3 times, so Peter doubles it and adds 1 for good measure,to show how wise he is and how what a good student of Jesus he is.

Nope. Jesus gives a response that suggests there is no limit: 77 times (some translations read 70×7 times) suggests an infinite and perfect forgiveness. After all, whose going to keep count? I might keep track of 7 offenses and on the 8th, you’re done for. But 77 (or 490)? Never.

Jesus is saying, “Peter, don’t keep score. Forgiveness is not about keeping track and teachings limit. God’s forgiving love is beyond limit, and this is your benchmark.”

Fine. I get that. All well and good.

But are there things that cannot be forgiven? At one point Jesus says “The only unpardonable sin is blasphemy against the Holy Spirit.” But he’s talking about God forgiving us, not about us forgiving. Are there violations that are simply to great to forgive?

I’ve never known that kind of anger or grief or pain or loss or violation. Many others have, and I hesitate to say what they could or should feel, think or experience.

I will continue to believe in the possibility of redemption and freedom from everything that captures and controls us, including those unforgivable violations.